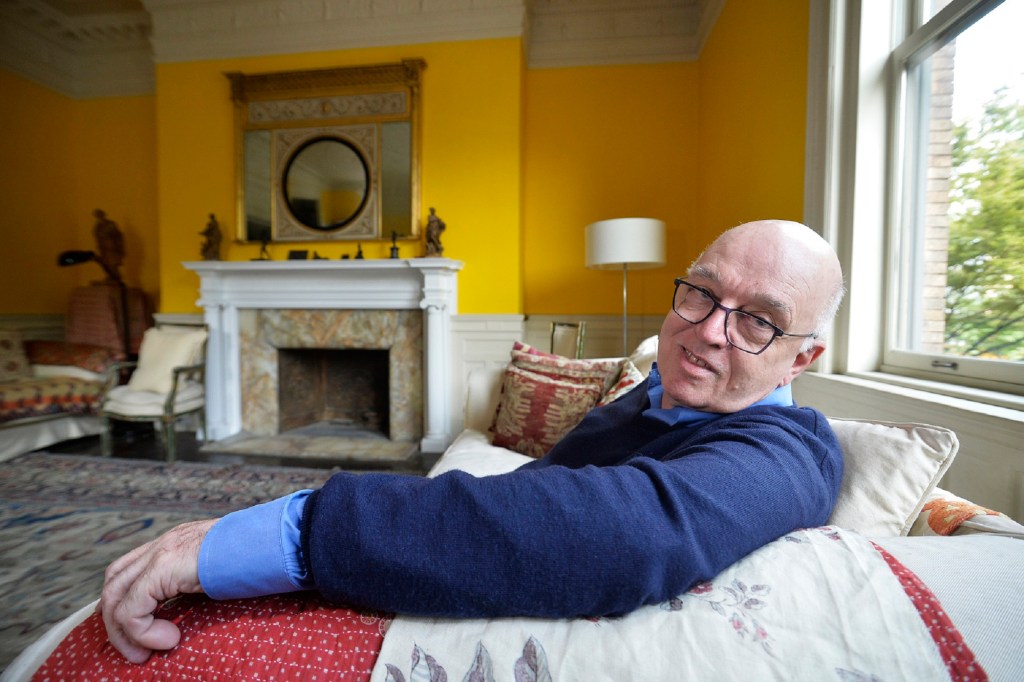 
Here’s a recipe for turning the plain into poetry.

When the renowned British poet James Fenton — along with his partner, the award-winning writer Darryl Pinckney — set out on a Manhattan house hunt more than a decade ago, the pair sought a home with enough space to fit their library of 10,000 books.

Not only did they find that in a 10,000-square-foot, five-story Harlem townhouse, which they purchased for $1.85 million in 2010 — but they also stumbled upon an opportunity to restore the decrepit shell of a formerly grand residence.

“Once we found this place, of course the motivation to preserve it in some kind of way became quite important for us,” Fenton, 72 — a former Oxford Professor of Poetry, known for his association with Christopher Hitchens and Martin Amis — told The Post.

Built in 1890 for John Dwight, a co-inventor of Arm & Hammer baking soda, the home at 1 W. 123rd St. later gave way to an arts school; then a black synagogue; a single-room occupancy; and finally a hideaway for squatters, graffiti vandals and a drug dealer who sold PCP. Now, the property — which the couple and their helping hands spent 11 years meticulously renovating — is ready for a new chapter.

Located in the Mount Morris Park Historic District, the 25-foot-wide spread recently listed for sale, asking $8.5 million — the highest ask for a townhouse in Harlem.

With other tastefully restored perks — including eight fireplaces and a grand wooden staircase — the home is a far cry from how Fenton and Pinckney found it, when they purchased it from developers who failed to gut it into condominiums. The cellar was under 3 inches of water. The dining room, as well as the three oval-shaped bedrooms on the levels above, had been chopped up into odd spaces with toilets tucked to the sides. Someone had even sealed off the grand wooden staircase. Luckily it wasn’t beyond repair, and thanks to having access to original photos and blueprints, they had a full understanding of its previous look.

“In some ways it had been rather well-preserved because nobody had gone to the expense of ripping out the interior,” said Fenton. “There was a lot of stuff still around, but it all, like everything about the house, needed renewing.”

Fenton declined to reveal how much it has cost so far to bring everything to shape, but said “it’s millions,” and a new owner will have to carry the rest of the work across the finish line. For instance, plans are in place for a yet-to-be-installed elevator and central air conditioning. Certain already-completed projects needed a heavy lift. One of them was cleaning the home’s mahogany and oak paneling — a specialized task that took nearly a year. Replacing all 52 windows required Landmarks Preservation Commission approval.

The couple tapped Samuel G. White, 74, a founding partner of PBDW Architects, as the architect of record to help with administrative processes and design, and it wasn’t a random hire. A Boston painter named Franklin Hill Smith designed the home for Dwight, with apparent influences from McKim, Mead & White — the famed Gilded Age architecture firm co-founded by Stanford White, Samuel’s great-grandfather, who famously designed the Washington Square Arch.

By the late 1800s, McKim, Mead & White had left their mark on Boston, in part, by designing tony homes along Commonwealth Avenue, one of which belonged to US Rep. John F. Andrew and — similar to the Harlem townhouse — features bay-shaped protrusions in its facade.

“[It also] had elaborate woodwork … there were elements made out of oak that were highly finished,” said the younger White of this Boston home. “You get the sense that Smith must have seen that house and it just made an impression on him, because there was nothing at the time that McKim, Mead & White did that was anything like it. Smith had very few models to copy from.”

In sum, the extent of the work has “cleaned up the block,” said Compass associate broker Bruce Robertson, who shares this listing with Compass’ Nick Rafello. “[The home] was derelict and a real eyesore. They cleaned up that corner, and it’s just one more positive step forward in the Harlem Renaissance, in my opinion.”

That’s a similar sentiment that others have shared with Fenton.

“It was something that I think a lot of people had felt ought to be done,” he said.