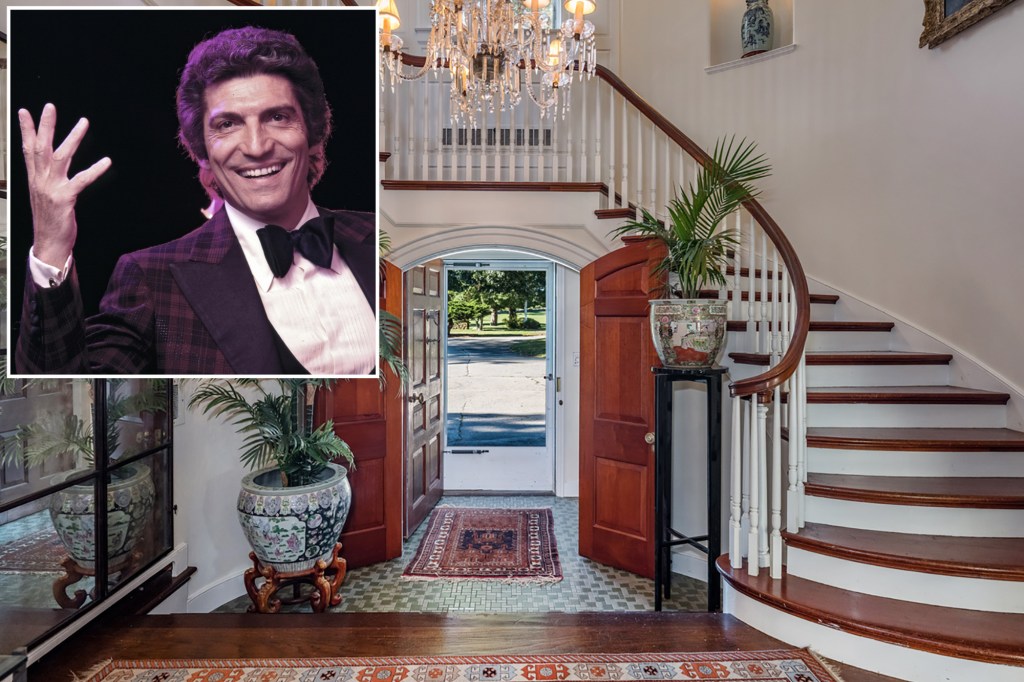 
These fields are alive with the sound of music.

A magical 240-acre compound — with a Georgian colonial manor built in 1938 — is on the market for $12.6 million. The Stonington, Conn., estate, at 91 Sergio Franchi Drive, is owned by Eva Franchi, the widow of world-renowned tenor Sergio Franchi.

Sergio, who performed with Ella Fitzgerald, sang at Carnegie Hall and the White House, was a regular on “The Ed Sullivan Show” and headlined a Vegas show for three decades — was a collector of antique cars. He first came to this property in the late 1970s to look at some retro wheels, and ended up buying the property whose fields, trees and stone walls reminded him of his hometown in Italy, Eva says.

Everything in the house, from the dishes to towels and antiques, were bought locally by Sergio. All he brought with him when he moved in was his car collection — and his prized 1925 Mercedes “Queen” is still parked in the garage. Sergio passed in 1990 and Eva is finally ready to sell and move to her new home in Beverly Hills.

The seven-bedroom main house is 6,300 square feet. It features a music room with a high-domed ceiling and a crystal chandelier. Eva says it would echo when Sergio hit the highest notes singing here.

The home also features a large country kitchen with a walk-in china closet and black-and-white checkerboard flooring, a large sunroom with an indoor pool and a slate patio for al fresco dining.

Sergio studied architecture before he became a singer, and his vision is evident throughout the home. Upstairs, he redesigned the main bedroom to become two rooms connected by an archway and used fabrics on the couches and chairs that Jackie O had apparently also chosen for her first apartment with John F. Kennedy.

The estate was formerly a farm owned by George C. Moore, who founded an elastic manufacturing company. Sergio converted the cow stalls into a garage for his cars, and the freezer house became his studio, where he loved to paint. He also converted a small tool house into a chapel, installing stained-glass windows taken from an estate in Greenwich, Conn., and naming it after his mother.

The couple would have dinners there by wisteria-clad stone pillars and formal gardens with mature trees, serenaded by local musicians playing Italian songs, with rolling fields and open pastures in the background.

Eva continued to host concerts in her husband’s memory for 25 years following his death — and top singers like Giada Valenti, James Valenti, Latonia Moore and David Miller have performed there for thousands of concert goers. The shows raise funds for the Sergio Franchi Music Scholarship Foundation, which awards $35,000 to $40,000 in scholarships to young singers each year and has given over 800 grants and scholarships since it was founded.